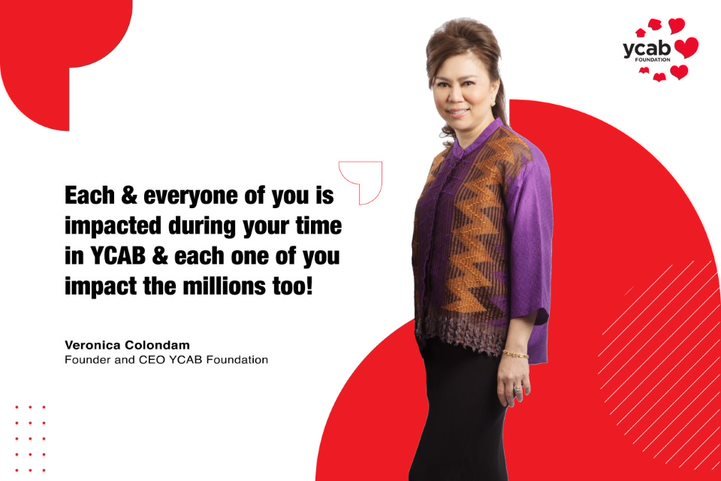 Established in 1999, YCAB Foundation was founded, by Veronica Colondam, with a mission to break the generational poverty cycle using financial inclusion as an instrument to enable education. Under her leadership, YCAB has successfully impacted the lives of more than 4.8 million youths. YCAB has also ranked 29th in the Top 200 SGO World by thedotgood in Geneva, in 2021.

Veronica is a mother, wife, and a woman leader who above all is a spiritual creature. Finding the meaning & purpose of her existence in all her roles in life becomes really important to her and it has translated into her passion and manifested through the work she does. Veronica always considers the vertical realm and how it integrates with the horizontal, the world we live in, and the people we’re connected with. Finding purpose and making sense of life have been the initial driving force that led Veronica to where she is today. YCAB is how she responds to this sense of purpose in her as well as her calling, which has brought a sense of balance to Veronica’s life. She sees the convergence of her life, work, and spirituality which is founded on one thing and one thing alone: love. As love is the ultimate universal value that is well understood, something the world needs

YCAB is a social enterprise with a vision to see a thriving world where youths and mothers are empowered through love, hope, and opportunity to be liberated from generational poverty in sustainable ways. Till now, YCAB has brought impact to more than four million underprivileged beneficiaries through education and economic access including entrepreneurship, while bringing greater financial inclusion to almost two hundred thousand micro-entrepreneurial mothers.

For more than 20 years (founded in 1999), Veronica and her team at YCAB have been about finding who they are, what they are doing, and how they can do this sustainably. Now that YCAB has done all that, it will focus more on the integration of its work – not only on equipping the marginalized with education but also on how to use economic empowerment to bring them to better welfare. Going forward, through this integration YCAB is looking to deepen the impact on the community that it serves. The firm belief to do well in everything that it does. To do good and doing it well means YCAB needs to have a long horizon of sustainability and to be deep in its impact.

The Spirit of Social Entrepreneurship

When asked about the factors that influenced Veronica to be an entrepreneur she says, “It wasn’t necessarily my decision but I think I was led to this space. I guess I was quite entrepreneurial when I first started my journey in the impact space by setting up business units to support the social mission. There wasn’t a term for how I operated YCAB then, but now I know I had been running YCAB in the spirit of what is now known as social entrepreneurship.”

How intuitively Veronica mixed business for profit and social impact, along with a view for financial sustainability then led her to the space. With a little background in investment and the capital market, Veronica found herself utilizing her knowledge and experience to address a missing link between social impact and business. Twenty years down the line trying to sustain her mission through businesses, she finds it very compelling now to try to move the capital market towards impact. Bridging the two worlds by creating a marketable investment product with embedded social impact is a new passion for Veronica. One of the ways we can achieve this is through impact investing. But she believes there are other products out there that should be more accessible and affordable for the masses to invest in while creating social impact. YCAB is on the verge of this, what an exciting time this is!

Veronica believes in the importance of setting the right work culture. As culture is mostly based on values, it became one of the top priorities for her while creating YCAB. The culture at YCAB is to serve, which has been broken down into 6 core values abbreviated as “i-SERVE”: Integrity, Service, Empathy, Vibrancy, and Excellence. This was cultivated on what YCAB was founded upon: Love. What is a better form of love than service? Not only does YCAB serves its beneficiaries, but Veronica and her team have to serve those who are working alongside them and serve those in partnership with them in delivering impact. Adding to that, as a non-profit committed to impact, it is also important for the company to take note of the technicalities because it has to be able to measure what it delivers, and its impact. This measurement of impact has to have the integrity of data and obviously, transparency. The best way to do this is to have a third-party evaluator and if possible, have their study published in peer review journals as a couple of YCAB’s cases have managed to achieve.

Preparing for a Better Future

Being a positive & and impact enthusiast, the future is something Veronica looks forward to with anticipation and eagerness. After 22 years, the obvious target for her is the perpetuity of YCAB. Upon figuring out YCAB’s business model & the structure by which to deliver its work, Veronica and her team are quite pleased with the sustainability of YCAB. Now, the team is working on a holistic succession plan for YCAB – this includes creating a solid foundation & indemnifying the next gen.

When asked for a few suggestions for young entrepreneurs she said, “You have to mean your sustainability and take it seriously. Not just financially but also in the way you do your business. A great way to start is with the three Ps of sustainability – People, Profit, and Planet. A few questions we can ask ourselves: How does your company treat your people – are they happy? What CSR efforts are being done and what has been the impact? Is your business committed to reaching net-zero carbon? At the end of the day, it all comes back to the way you do your business. We cannot sacrifice one aspect for the benefit of another – it’s all about the balance. This requires a high level of commitment but we all have to do our part.”