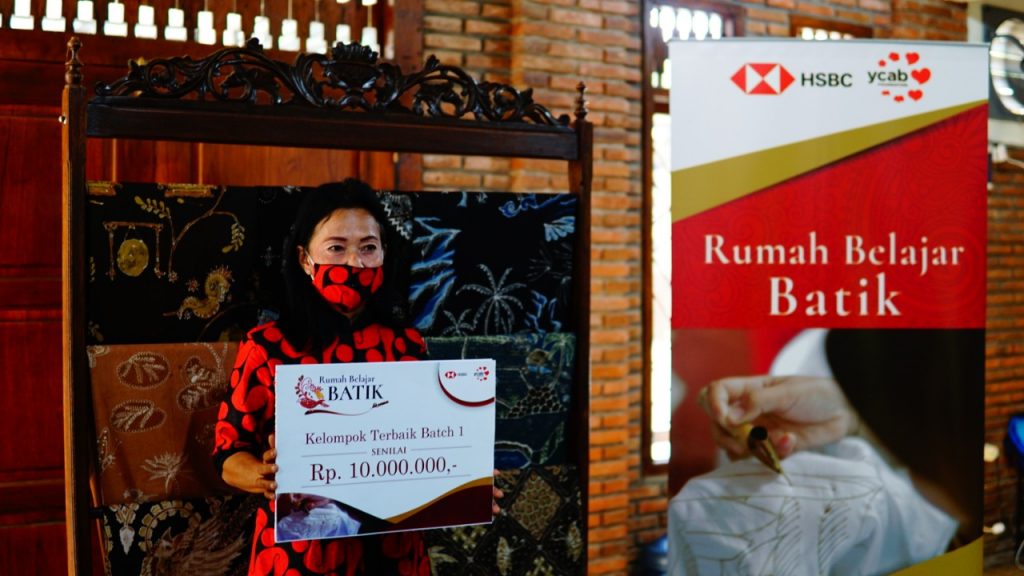 Sekarwangi batik group, a part of Rumah Belajar Batik Semarang , a collaboration between YCAB Foundation and HSBC Indonesia, is the winner of the best group competition organized by YCAB. Students receive technical training for manufacturing printed and written batik using natural dyes. After training, they will have regular mentoring during entrepreneurship production and workshops.

Batik, Indonesia’s national heritage is getting more and more popular these days. YCAB Foundation is supportive of preserving Batik as our national heritage and would like to get more and more young people to learn to create batik. With that, YCAB Foundation and HSBC Indonesia established Batik Learning House in Semarang, Central Java. It is also with Batik Learning House that YCAB aims to open up new job opportunities.

We hope that in the future Sekarwangi batik can play a significant role in preserving batik by inviting young people to love their own cultural heritage, namely batik. As well as making batik Sekarwangi continues to exist and is increasingly recognized by many people. These days, Batik Sekarwangi started to receive a lot of orders for both printed and handmade batik, both offline and online. There are also orders on a large scale, from a government agency for batik uniforms.

“We are happy because the orders from outside keep us enthusiastic and confident in developing our batik group,” says Wastikaningtyas, the group leader of Batik Sekarwangi.

We also hope that Batik Sekarwangi studio which is also a place of production can become a center for batik tourism so that it can become a tourist destination as well as a place to educate the public about batik, to participate in the preservation of batik culture. Sekarwangi batik has a goal to continue to develop themselves and innovate not only in production but also to preserve the nation’s culture, namely batik through the concept of educational tourism which will later be applied to their studio that they are planning.